Intent-Based Networking has emerged as a new paradigm in network automation, promising to simplify network configurations, reduce cost and ensure agility in managing complex enterprise networks. The idea is to allow the IT user to express an “intent” as what they want the network to do, and rely on an Intent-Based Networking System to execute network configuration changes based on that intent and verify that the intent was executed properly. However, not all Intent-Based Networking Systems are the same and many only deliver on a portion of this promise.
Only GluwareⓇ Intelligent Network Automation’s orchestration engine is able to consume abstracted network “intent”, configure multi-vendor, multi-domain networks, and verify that the correct changes with verification. 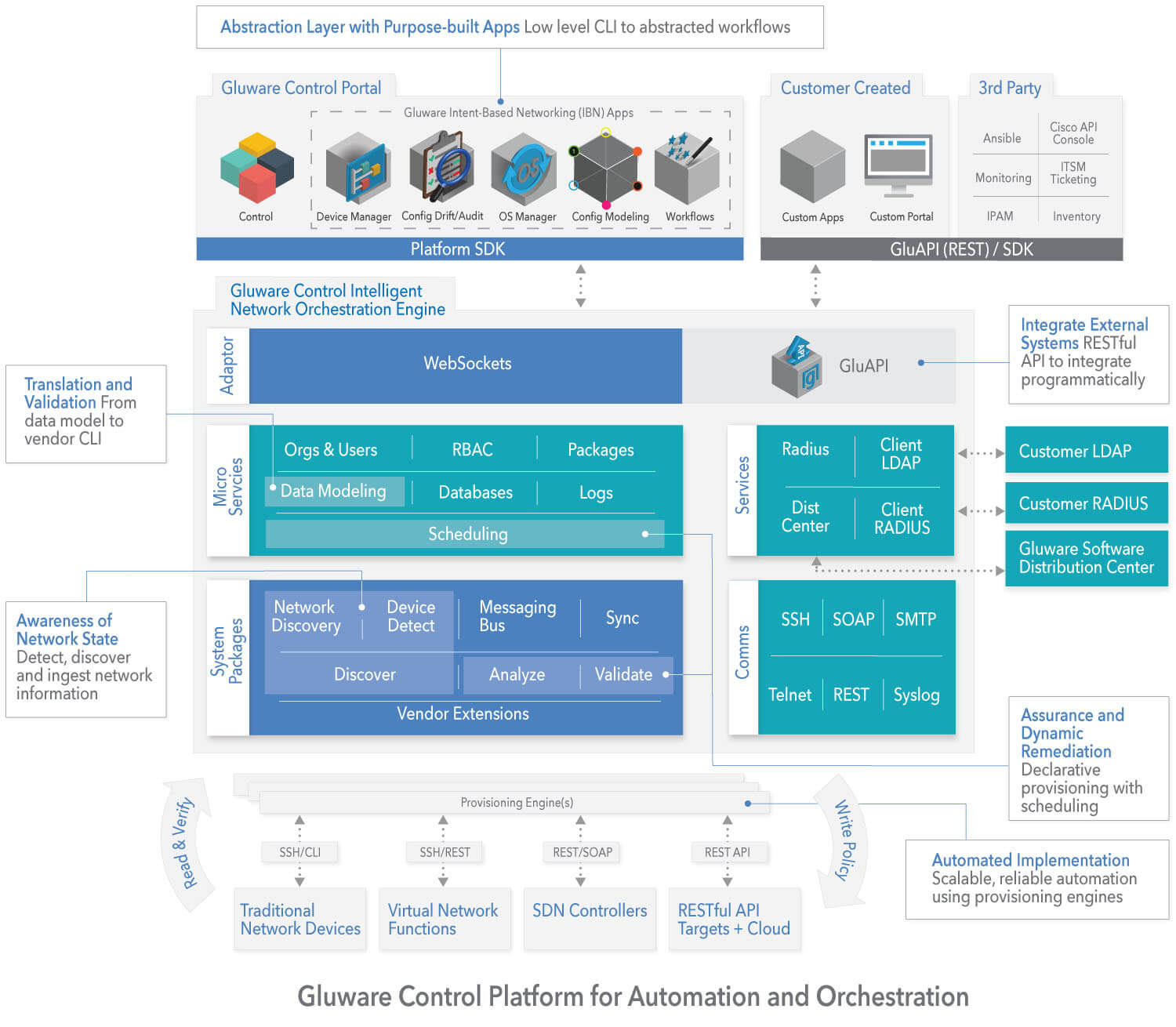 While there is no true single standard specification for Intent-based Networking Systems, use the term to describe their offerings and the networking community is left to sort of the differences between the reality and the hype. To help bring clarity to the cause, Gartner produced an “Innovation Insight: Intent-Based Networking Systems” paper on the topic, published in February 2017 ID: G00323513. Gartner defined an Intent-based Networking System as one that provides four capabilities:
Translation and Validation – The system takes a higher-level business policy (what) as input from end users and converts it to the necessary network configuration (how). The system then generates and validates the resulting design and configuration for accuracy.
Automated Implementation – The system can configure the appropriate network changes (how) across existing network infrastructure. This is typically done via network automation and/or network orchestration.
Awareness of Network State – The system ingests real-time network status for systems under its administrative control, and is protocol- and transport-agnostic.
Assurance and Dynamic Optimization/Remediation – The system continuously validates (in real-time) that the original business intent of the system is being met, and can take corrective actions (such as blocking traffic, modifying network capacity or generating notifications) when the desired intent is not met.
Most industry coverage on the topic seems to agree on these four main attributes, yet many of the current solutions do not address all four.  Also, there is some debate as to “how high” the level of intent should be – is it really a business requirement/policy or is it more specific network requirements that are automatically executed.

What is the current state of Intent-Based Networking systems?

Many solutions coming to market are using “intent-based” in their marketing material, but are not living up to the capabilities.  Solutions are falling into three main categories: 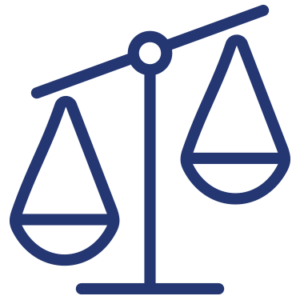 How Gluware measures up 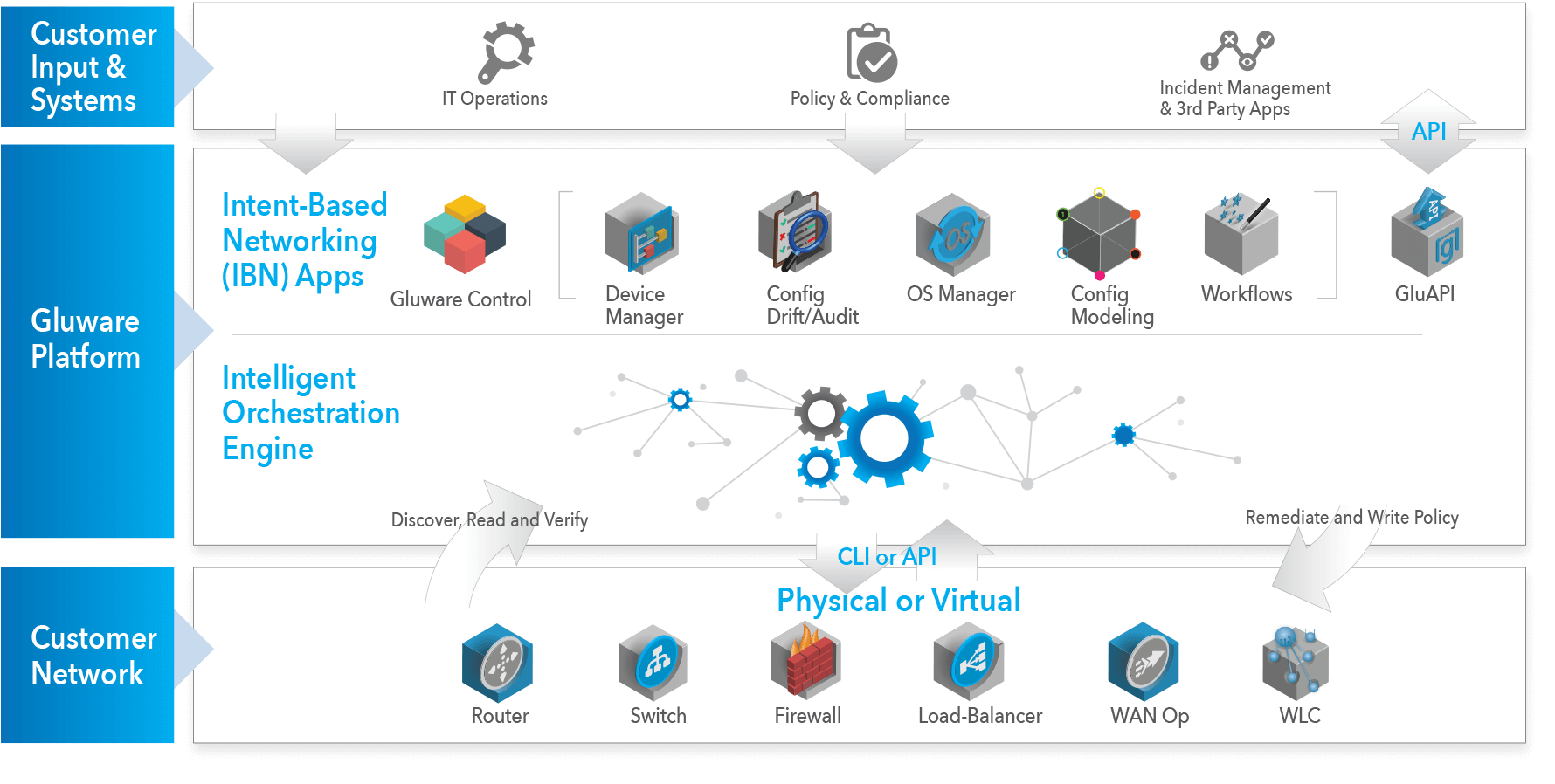 The following capabilities make Gluware uniquely qualified to solve the network automation challenges for the largest enterprise networks in the world:

This website uses cookies to improve your experience while you navigate through the website. Out of these cookies, the cookies that are categorized as necessary are stored on your browser as they are essential for the working of basic functionalities of the website. We also use third-party cookies that help us analyze and understand how you use this website. These cookies will be stored in your browser only with your consent. You also have the option to opt-out of these cookies. But opting out of some of these cookies may have an effect on your browsing experience.
Necessary Always Enabled
Necessary cookies are absolutely essential for the website to function properly. This category only includes cookies that ensures basic functionalities and security features of the website. These cookies do not store any personal information.
Non-necessary
Any cookies that may not be particularly necessary for the website to function and is used specifically to collect user personal data via analytics, ads, other embedded contents are termed as non-necessary cookies. It is mandatory to procure user consent prior to running these cookies on your website.
SAVE & ACCEPT